Working away on the next issue of Evangelium with EWTN in the background, I heard “I announce to you a great joy: We have a pope! The most eminent and most reverend lord, Lord Jorge Mario, Cardinal of the Holy Roman Church, Bergoglio, who has taken for himself the name Francis.” It was of course in Latin, but because of many influences including Credo, I was able to catch most of it.

So Cardinal Bergoglio has decided to call himself Francis. We have not yet learnt which Francis he means to name himself for — Francis of Assisi, Francis Xavier, or even Francis de Sales. But he is a Pope of firsts: the first Francis, the first from the New World, the first Jesuit Pope, very likely the first Pope to ask the people to pray for God to bless him before he blessed them. Probably the first Bishop of Rome to greet his new diocese with “good evening, everybody” and to close with “go get some sleep”. And the first pope properly called a son of Second Vatican.

END_OF_DOCUMENT_TOKEN_TO_BE_REPLACED

Audio Recordings from Day of Recollection Available from St.…

A successful CREDO Day of Recollection in the Chapel of Saint Anselm at the Oratory of Saints Gregory and Augustine last Saturday proved a worthwhile occasion to enhance our Lenten observance and enjoy some Christian fellowship. Father Ambrose Bennett of the Saint Louis Priory presented the opening conference and this was followed by the Sacrament of Penance as the rosary was prayed in common. Father Bennett also celebrated the Mass and our own Father Brian Harrison was in attendance to sing the day’s Epistle and provide a homily.

The Mass was very uplifting, being sung in the Extraordinary Form with the schola of St. Mary of Victories under the able direction of Mr. Stan Metheny. After a catered lunch and a break, Father Bennett gave a second conference. New to our annual event was sung Vespers, concluding with Benediction. The CREDO Day of Recollection is an annual event. If you missed this year, we hope to see you at our next event!

Audio recordings of Fr. Ambrose’s conferences and Fr. Harrison’s sermon from the Day of Recollection are available from St. Joseph Radio for $12 including postage. 2 CD set, about 1-3/4 hours of material. Call (636) 447-6000 or e-mail ordermo1@saintjosephradio.net. (Fr. Ambrose made two Chesterton references!)

If you’ve ever wondered how Western civilization arrived at the present predicament in which it finds itself, morally, fiscally and relationally, and how it might extricate itself, and if you aren’t in a position to spend a lifetime finding answers to those important questions, this book is for you. END_OF_DOCUMENT_TOKEN_TO_BE_REPLACED

Reviewed: Ten Ways to Destroy the Imagination of Your… 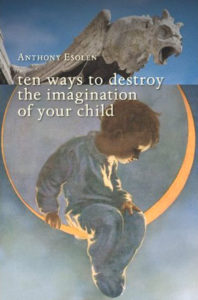 “Don’t buy this book – unless you like non-stop wit, energetic writing, fresh insight, and abundant wisdom about how to shape a good life for your children, and maybe even yourself.” — Robert Royal, President, Faith and Reason Institute END_OF_DOCUMENT_TOKEN_TO_BE_REPLACED

Saint Thomas More a Model for Our Time

It strikes me that we have in Saint Thomas More a model for our time. The question we face is similar: shall religion be supreme or shall temporal opinion? What is the extent of the accommodation that may be reached? Has truth itself a claim on our very lives? And have we the courage of Saint Thomas More to act entirely without support? Read this talk given by Hilaire Belloc in July of 1929, before Thomas More was raised to the altars, at the More Memorial Exhibition, and then let us in these days invoke the patronage of Saint Thomas More, earning it, so to speak, by our own actions, and lending him a support in posterity he has not found in England, France, or elsewhere in the ruin of Christendom.

This was delivered as a speech and has the quality of spoken word. Further, it had sentence structures more complex than we are used to and was given by an Englishman, not an American. My advice to you is to read it aloud in full voice so you will slow down and pay attention to how it sounds. At the very least, imagine you are reading aloud, moving your lips. I found it in a book compiled by Patrick Cahill titled Hilaire Belloc One Thing and Another A Miscellany from His Uncollected Essays, Hollis & Carter, 1955. In turn Cahill found it in The Fame of Blessed Thomas More, Sheed & Ward, 1929.

The Witness to Abstract Truth

I come to speak to you to-day upon the Blessed Thomas More, and I come to speak of him under one aspect alone; for what one man can say in the few brief moments of a public address should not, upon such a subject, touch more than one aspect, lest his audience be confused. But that aspect is surely the chief one in connection with such a name. END_OF_DOCUMENT_TOKEN_TO_BE_REPLACED

The St. Louis Art Museum has an exhibit up Federico Barocci: Renaissance Master through this coming Sunday, January 20th, that is well-worth seeing. This particular preview image here is better than many you will find online — the colors and tone-scale are pretty true, but nothing compared to seeing the real thing in person. The idea that “religious art” is dark and somber is wrong, wrong, wrong. These paintings are stunning and huge — most of them are of architectural scale, not paintings for a suburban living room.

Barocci had a truly Catholic eye — he could capture a supernatural vision within mundane (even funny) ordinary life. An example is here in the painting called La Madonna del Gatto, or roughly Our Lady of the Cat. She is holding St. John and our Lord in a domestic setting where the last prophet of the Old Testament is playing with (teasing?) a cat. The message here is that Salvation History isn’t a mere abstraction — it happened and looked at least at the time pretty ordinary (and conventionally nuts). This is what  “incarnation” means and Barocci got it on canvas. END_OF_DOCUMENT_TOKEN_TO_BE_REPLACED

Robert George: The Time of the Comfortable Catholic is…

With this statement, Professor Robert George of Princeton University began his outlook on American life in the near future. Addressing more than 160 audience members at the November Credo Forum, he reminisced briefly about the Catholic Church’s influence during the “golden years” of the 40’s and 50’s, years when government intrusion in our institutions was minimal, and the ten commandments formed the basis of our national moral code.

But since the 60’s, government intrusions have increased until today they make the faithful Catholic exceedingly uncomfortable. Today we look ahead to a massive federal health system that confronts both Catholic institutions and individuals with absolute moral choices that cannot be ignored. And the secular culture has become both morally adrift and powerful, so powerful that immorality is enshrined in our nation’s laws. As Catholics in such a culture we need to be always militant, keeping our minds centered on truth and subjecting to rigorous scrutiny whatever is presented to us by the media. Today the culture we live in directly opposes Christianity, so if we are true Christians we shall be very uncomfortable in the future.

END_OF_DOCUMENT_TOKEN_TO_BE_REPLACED

Marriage Equality and Love That Only a Mother Can…

One of the main claims on behalf of “marriage equality” is that sex does not matter at all with respect to child rearing. The proponents of gay “marriage” must assert this, of course, lest they cede any ground at all to those vile, bigoted, racists-by-analogy (albeit a demonstrably poor analogy), Biblethumping, Trajectory-of-History-denying heterosexists. For if sex matters in parenting, then the female contributes something that the male cannot and vice versa, and that alone suffices for heteronormative supremacy. Thus, “SSM” advocates must assert that parenthood is at its essential core androgynous.  Evidently Little Will was not the only who may not have understood the debates in Maryland’s House.

But I suspect that the Governor knows that he would lose votes if he denied the uniqueness of a mother’s love or said something like, “His little face was lit up with joy, and he was cheering as his moms hugged him with the love that can be provided by any of the five sexes.” Nevertheless, what he said betrayed a heteronormativity that simply cannot be reconciled with the arguments for “marriage equality”. My question then is this: what does it say about Maryland’s vote for gay “marriage” that the man who is the most powerful supporter of “SSM” has clearly used heteronormative rhetoric to advance a cause which is just as clearly antithetical to the very notion of heteronormativity? Does the governor misunderstand the arguments for the issue he has chosen to trumpet ever so loudly? Well, then, how many other citizens of Maryland misunderstood these arguments when they voted yes on Question 6? Or does he know very well the necessary androgynous implications of “marriage equality” and has chosen to hide them because he thinks his constituency is all for equality but not quite ready yet for legally enforced androgyny? Hmm?

In an address given at the Red Mass in Green Bay, Wisconsin on September 20th, Credo’s 2011 Christ the King Forum Speaker, Bishop Thomas John Paprocki, defended Wisconsin Representative Paul Ryan against heresy charges coming from various quarters in the Catholic press and academy. Instead of reading what other say about what his Excellency said, you can read the words themselves by clicking right here.

Thanks to Credo member Don Holdener for the contribution.

When Mitt Romney announced on August 11th his selection of Paul Ryan of Wisconsin to be his vice-presidential running mate, excitement bubbled up all over the country among Catholics, pro-life activists, and citizens who like well-read and intellectual political leaders.  Not since 1964, when Barry Goldwater chose Rep. William Miller of New York, has a Catholic appeared on the G.O.P. ticket.  Probably not since 1956, when the Democrats re-nominated Adlai Stevenson, or 1932, when Herbert Hoover lost his re-election bid, has a candidate of such acknowledged intellectual weight appeared on a national ticket.
END_OF_DOCUMENT_TOKEN_TO_BE_REPLACED